Regeneration of healthy heart tissue to repair and aid the failing myocardium is of great interest to human health and longevity.  Approaches to heart tissue repair have included mechanical assist devices, gene therapy, and cell transplantation.   Since the mammalian heart is one of the least regenerative organs, cardiac muscle injury is a leading cause of death and disability worldwide. 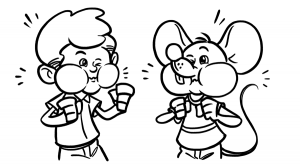 Nakada et al. exposed B6 mice to low oxygen tension for over two weeks (1).   There were a greater number of heart cells and the hearts were larger in hypoxic mice than in normoxic mice.  The gradual reduction of inspired oxygen downregulated mitochondrial metabolism and ROS production in adult cardiomyocytes.  Functional recovery in mice with myocardial infarction (MI) was significantly better in hypoxic animals (1).

Extending hypoxia to 3 weeks resulted in greater mortality in hypoxic MI animals, yet surviving hypoxic animals still had better preserved cardiac function than normoxic MI animals.  The authors suggest that the hypoxic conditions might have been rough on the animals [e.g., ”in pursuit of more tolerable hypoxic conditions, we tested mild  hypoxia (10% oxygen)…”] (1).  The data indicate that food consumption was halved in hypoxic animals.  Remarkably, body weight was hardly affected.

The ECGenie can been used to monitor the heart rate of hypoxic animals vs. normoxic animals, as another metric of the metabolic effects of hypoxia and recovery from MI.  The heart rate of active adult B6 mice at rest is ~725 bpm, rising above 800 bpm with activity, and falling to ~450 bpm while resting.  The ECGenie readily shows ST segment changes with ischemia and infarction.   It is interesting to consider the present study in different strains of mice with different baseline metabolics (2), or mice treated with sympathetic and cholinergic compounds (3).   Age and blood flow regulation are also known to affect survival under hypoxia.  The ECGenie readily reports ECG changes in newborn and aged mice, in normoxic and hypoxic conditions, at baseline and following sympathetic and cholinergic drugs.

The elegant study performed by Nakada et al. demonstrates that the regenerative properties of the adult mammalian heart can be reactivated by exposure to gradual systemic hypoxaemia, and highlight the potential therapeutic role of hypoxia in regenerative medicine (1).