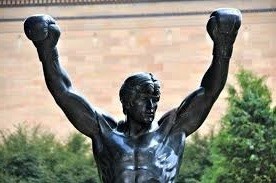 Sylvester Stallone, the creative genius behind the universally known and beloved boxer Rocky Balboa, was recently honored with the Golden Globe for the best supporting actor in his seventh “Rocky” film Creed.   Mr. Stallone may yet again be awarded an Academy Award [Rocky won Best Picture in 1977], in now-realized recognition of his talents as an actor.

END_OF_DOCUMENT_TOKEN_TO_BE_REPLACED

We recently applied DigiGait to the study of mice with a mutation in the gene that encodes transforming growth factor-β3 (TGF- β3), a murine model of a rare condition, first reported in young Ms. Bea Rienhoff. Bea’s symptoms include postural abnormalities and low muscle mass. DigiGait was designed to identify, in mice, subtle deficiencies in strength, balance, and coordination that are often present with rare diseases. The animals were provided to the Mouse Specifics team by Thomas Doetschman’s laboratory at the University of Arizona in Tucson.

END_OF_DOCUMENT_TOKEN_TO_BE_REPLACED

This CNN headline was too good to pass up! :   Mouse Spotted on Mars?

Given that Mouse Specifics, Inc. is now internationally recognized as a leader in novel in vivo life sciences instrumentation, is it possible that perhaps our innovative technology is making its way throughout the solar system?  Is that the ECGenie set up in the HAB in The Martian, director Ridley Scott’s film adaptation of the best selling book by Andy Weir?

END_OF_DOCUMENT_TOKEN_TO_BE_REPLACED

Gait analysis in lab animals is increasingly being recognized as a key feature in the research of disorders that affect human motor behavior.  For example, gait disturbances are symptomatic of patients with Parkinson’s disease, muscular dystrophy and arthritis, but rarely has gait been studied in the animal surrogates.  Other assays, such as grip strength, rotarod and activity fall short, both individually and collectively, in describing the convergence of strength, balance and coordination in enabling a subject to ambulate.   In this webinar we therefore aim to present key concepts regarding how gait can be studied and its value as a research method for animal models of pain, CNS, neuromuscular and neurodegenerative disorders.

His group has shown that weekly treatment with the neurotoxin, MPTP, for up to 4 weeks, results in a gradual loss of dopamine within the nigrostriatal pathway.  He will discuss how this unique model may or may not correlate to the extent of motor function tests available and will discuss the sensitivity of gait analysis in describing mice with Parkinson’s disease.  Dr. Meshul will also describe other studies in which deficits in nigrostriatal dopamine can be blocked or even reversed and whether certain measures of gait function can show corresponding improvement. Dr. Carol Milligan, Professor of Neurobiology & Anatomy at Wake Forest School of Medicine, will present on behavioral deficits that correlate with early pathology in the SOD1 mouse model of amyotrophic lateral sclerosis (ALS).  As Dr. Milligan describes, one potential explanation for why preclinical studies in animal models have not translated positively to clinical trials may be insufficient understanding of when and where pathogenesis begins.

Characterization of these early events and correlation to human disease is essential, however, for insight into disease onset, discovery of presymptomatic diagnostic disease markers, and identification of novel therapeutic targets.  Dr. Milligan will highlight early pathological changes identified in her lab and, importantly, analysis of mouse movement that has revealed deficits corresponding to early pathology.  She will also highlight that careful characterization of disease models is critical to the design of scientifically sound preclinical studies.

END_OF_DOCUMENT_TOKEN_TO_BE_REPLACED

END_OF_DOCUMENT_TOKEN_TO_BE_REPLACED
10. AlphaB-crystallin mediates peripheral nerve regeneration
AlphaB-crystallin (αBC) is a heat shock protein that is highly expressed in many neurological disorders, including Parkinson’s disease and amyotrophic lateral sclerosis.   There is great interest in developing αBC as a therapy for many types of nerve injury. Optic neuropathy, for example, has been rescued with exogenous αBC via decreases in microglial activation and promotion of nerve oligodendrocyte survival. Lim and colleagues from Calgary investigated whether αBC could influence regeneration and functional recovery following peripheral nerve injury in mice.

END_OF_DOCUMENT_TOKEN_TO_BE_REPLACED

6. Neuromusculoskeletal modelling and the gain transition of a quadruped according to its speed in rats

This poster details a neuromusculoskeletal model of rat hind limbs during walking and trotting. Toeda and colleagues

from Tokyo developed a musculoskeletal model of the fore- and hind limbs of the rat based on empirical anatomical data. To model the muscles, they focused on six prime muscle for the forelimbs, and seven muscles for hind limbs. respectively.

They present a neural system model invoking limb movement control, according to muscle synergy to account for coordinated structure in muscle activities, and postural feedback control, based on shoulder height, hip height and horizontal center of mass velocity. They present simulations of walking and trotting gait, and impose defects of the postural feedback system (by lesions to the cerebellum) to induce unstable gaits and tripping.
END_OF_DOCUMENT_TOKEN_TO_BE_REPLACED

There is a growing awareness of the link between compromised heart function and nervous system abnormalities.

This point is beautifully conveyed in a poster presented by Dr. Anand Pandey and colleagues this coming Sunday at SfN. We are particularly excited to see how treadmill locomotion in rats is affected after cardiac arrest.

END_OF_DOCUMENT_TOKEN_TO_BE_REPLACED

The heart is a powerful organ, sending blood through thousands of miles of vessels to fuel the body.  This intricate system works continuously, rhythmically ~100,000 times per day, to provide us humans with oxygen and nutrients while cleansing our systems of harmful waste.   Each cycle is activated by an electrical impulse. END_OF_DOCUMENT_TOKEN_TO_BE_REPLACED

We provide innovative solutions for the physiological study of models of human diseases. Our instruments and services empower researchers to generate higher quality translatable data faster and at lower cost. Explore the resources here or contact our scientists today to learn how Mouse Specifics can transform your pre-clinical research.